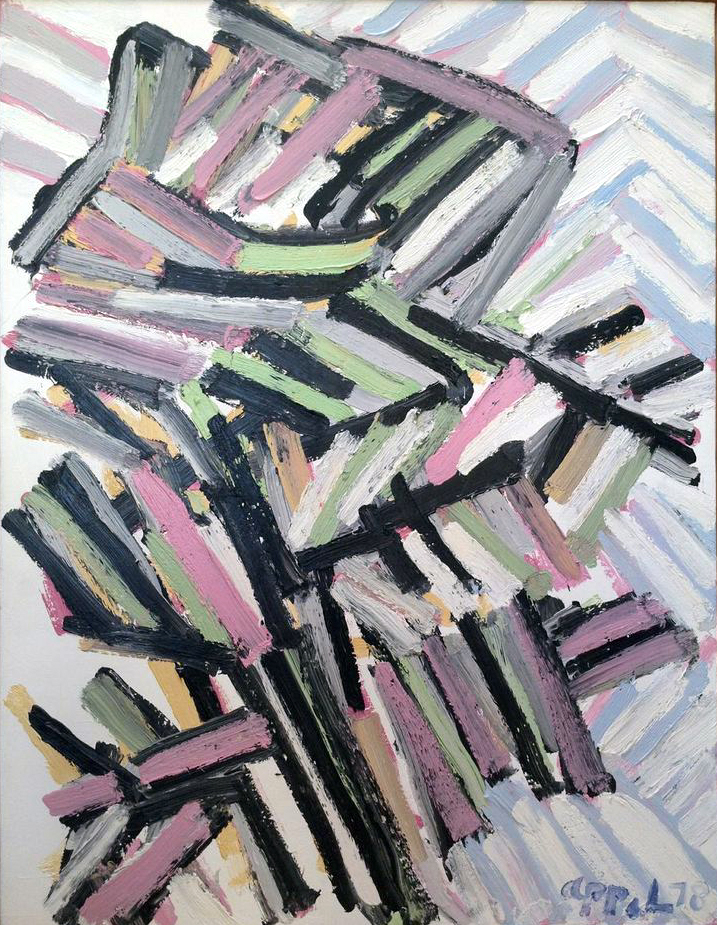 Painted in short parallel strokes, with the exception of black, all colours are bright. Here Appel painted with light, his strokes suggest form, space and the bright and vibrant  atmosphere of the south. That which cannot be expressed in words or with reason.

It always annoyed Karel Appel that one always mentioned his CoBrA time that only lasted for three years, while his oeuvre spans more than sixty years.

Appel embraced an international life style. During his whole life he would keep moving from city to city.  And while he kept changing of scenery, he also kept reinventing his style during his entire career. Particularly in the late 1970’s there was a significant transformation.

In 1977, after a period of working straight from the tube with a palette knife Appel picked up his brush again and changed back from acrylics to oil paint. In that year he had moved from Paris to Monaco, following drastic tax measures by the French Government. From now on he would spend the summer months in Monaco, painting. (Fall and winter would be spent in New York). In this period his palette was light, with lots of green.
Then, he came across a book on the work of Vincent van Gogh. It contained magnifications of Van Gogh’s brushwork. He was baffled by the rigorous organization of Van Gogh’s brushstrokes, his freedom and his discipline, the controlled rhythm, with no loss of freedom. Overnight, it changed his style.

Before, form would evolve out of a whirl of brushwork, but now he consciously worked towards a form and it was his brush that, stroke after stroke, seemed to model the form. Never before in his career was Appel so focused on a conscious and meticulous build-up, a controlled and disciplined way of painting. Appel didn’t feel like he was consciously painting the motives, they just appeared from under his brush. The broken brushwork brought him the uniformity he was craving for. Impulses and emotion no longer formed his motive, the brush strokes were subject to his urge to compose. His controlled technique determined his painting, but the structure of parallel brush strokes or fishbone pattern, ink black or in white, was free.

“I see all forms and things as a still life” he said in New York in 1978. “The forms of all things reveal themselves to me, but they are not attached to the self. I have been painting for years to get to these light, spontaneous forms of expression.”  The painter – in a Buddhist way – becomes “empty”, enabling him to touch the essence of things, the essence of life.

“In a few subtle brush strokes the subject emerges, which can show an animal, a flower, a landscape in its essence. Every form stands alone and therefore gets exceptional meaning; it has been included in the rhythm of colours, of which the onlooker forms a part. The brush stroke is so important because it indicates precisely what is not there: depth, spaces, jokes, unexpected twists. Bright colours portray the present moment. All this in order to try to catch the essence of all things.”

Trees were a favourite theme, they fascinated Appel. A tree changes, adapts to the seasons and revives in the spring, but it also exists outside of time, because trees have been there as long as mankind can remember. Even though a tree has no eternal life, it touches eternity. Appel wanted to grasp this secret dimension of the tree, show that the tree is almost invisible but at the same time that is present in a most powerful way. “You can see the phenomena, but you cannot grasp it, it runs through your fingers” as he remarked in 1979.

That which cannot be expressed in words or with reason.


Friday, January 30th, 2015 under Blog.
Follow responses through the RSS 2.0 feed. Responses are currently closed, but you can trackback from your site.